Sorry! You missed Journey with The Pretenders at Ak-Chin Pavillion 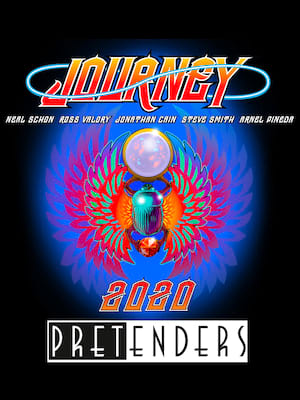 Journey with The Pretenders

Why See Journey with The Pretenders?

Journey and the pretenders unite!

Originally founded by two Santana members, Journey have gone down in the history books as America's greatest creators of fist-pumping, feel-good anthems. Catch them live in 2020 as they take The Pretenders on tour with them! You'll be treated to Journey hits from start to finish including of course, the biggest selling digital catalog single in history, 'Don't Stop Believin',  which was introduced to whole new audiences through its iconic use in the final episode of The Sopranos and in the Fox show Glee.

In 2007 Journey found a new lead singer through Youtube, Arnel Pineda, and have been touring and releasing new music ever since. Don't miss the Arnel, Neal Schon, Jonathan Cain, and Steve Smith when they take to a stage near you this year!

Seen Journey with The Pretenders? Loved it? Hated it?

Sound good to you? Share this page on social media and let your friends know about Journey with The Pretenders at Ak-Chin Pavillion.