Sorry! You missed Daniel Caesar at The Van Buren 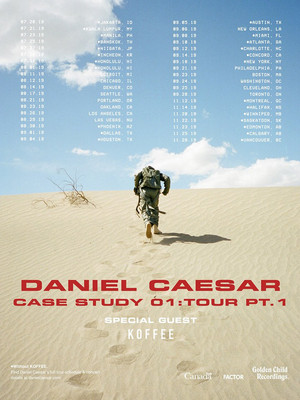 'One to watch' Caesar hits the road!

In celebration of the release of his second studio album, Canadian singer-songwriter Daniel Caesar is hitting the road this fall on his Case Study 01: Tour PT. 1! Caesar first gained critical acclaim with the release of his first two EPs, 2014's Praise Break and 2015's Pilgrim's Paradise. Since then the star on the rise has garnered a dedicated following and the attention to music buffs worldwide.

Caesar's debut studio album, 2017's Freudian (inspired by the famous neurologist) was an instant success and landed in the number six spot in the US R&B charts and reached the top 30 of the US charts! Case Study 01, Caesar's second album, sees him move away from his usual love ballads and explore the wider world around him, accompanied by new-age synth, smooth guitar, and otherworldly vocals.

Sound good to you? Share this page on social media and let your friends know about Daniel Caesar at The Van Buren.