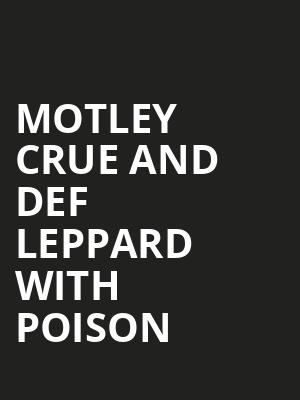 Possibly the most hard-rocking tour ever!

Why See Motley Crue and Def Leppard with Poison?

Heavy metal hellraisers Motley Crue have never been a group to play by the rules and it looks like this legendary outfit are still up to their old antics as they announce their 2021 Stadium tour, five years after their definitely-the-end Farewell jaunt wrapped up! This awesome resurrection sees the boys joined by some of their finest peers, including Def Leppard, Poison and Joan Jett. If that's not enough for fans to forgive, we don't know what is...

Riding the first wave of glam metal, the band formed in 1981 and quickly gained a reputation for their hedonistic lifestyle and rock'n'roll personas - tattoos, prison stints and drugs, these guys have seen and done it all. With a back catalog comprised of 9 lick-laden, hard-rocking studio albums and a penchant for an over-the-top live show, Crue are true legends of Rock.

Titans of the 80's British Heavy-Metal revival and progenitors of contemporary Pop Metal Def Leppard have never let anything stand in their way, even their drummer Rick Allen losing an arm to a car accident. Overcoming this with a custom kit and a new style of drumming, the band surged on to create the album 'Hysteria', which hit 12 times platinum in US sales and sold over 20 million copies worldwide.

Hair-metal icons and Pennsylvania natives Poison have been rocking hard since 1983. No strangers to touring with both Def Leppard and the 'Crue, they've been on the road extensively for the better part of the last decade. Whilst the line up may change (still led by frontman Bret Michaels) the soul and glam-rock spirit is more present than ever!

Since co-founding pioneering all-girl punk outfit The Runaways in 1975, Joan Jett has marched, and played flaming rock riffs, to the beat of her own drum, emerging as one of the most important and influential female figures in rock and roll history. Never allowing her gender to overtake the agenda, Jett broke through to the mainstream with stripped-down, good old fashioned, loud and hook-laden songwriting and continues to rule the stage with her backing band the Blackhearts, with whom she released seminal cover 'I Love Rock 'n Roll' in 1982.

Photo by Luuk Wouters on Unsplash

Seen Motley Crue and Def Leppard with Poison? Loved it? Hated it?

Sound good to you? Share this page on social media and let your friends know about Motley Crue and Def Leppard with Poison at State Farm Stadium.