Sorry! You missed Band of Skulls at The Crescent Ballroom 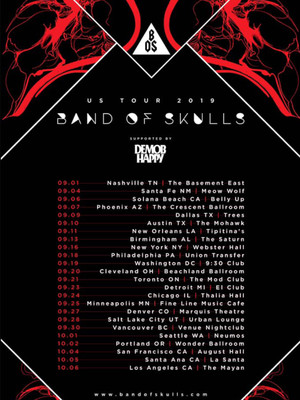 Band of Skulls are hard to pigeonhole. Part Led Zeppelin, part Royal Blood, part god knows what... I guess you could say they're pretty unique.

Why See Band of Skulls?

British rockers Band of Skulls head on tour across America

Hot off the back of their fifth studio album "Love Is All You Love", British rockers Band Of Skulls will tour across the USA in September and October 2019, with support on all shows from Demob Happy. Opening at the Basement East in Nashville, an extensive 5 week run follows, with a rip-roaring live show including stops in Austin, New York, Toronto and Los Angeles.

Forming in Southampton, England in 2004, the band now consists of Russell Marsden (guitar/vocals) and Emma Richardson (bass/vocals), officially a duo since the 2017 departure of drummer and founding member Matt Hayward. The group's enormous sound has seen them hit a number of lofty peaks across their career, including support slots with Muse, The Dead Weather and Black Rebel Motorcycle Club, appearances on Late Night with Seth Meyers, Later With Jools Holland and KCRW's Morning Becomes Eclectic, and songs featured on the soundtracks for video games Need For Speed: Most Wanted, Forza Horizon 3 and NHL 13.

Seen Band of Skulls? Loved it? Hated it?

Sound good to you? Share this page on social media and let your friends know about Band of Skulls at The Crescent Ballroom.