Sorry! You missed LeAnn Rimes at Chandler Center for the Arts

LeAnn Rimes is also touring to: 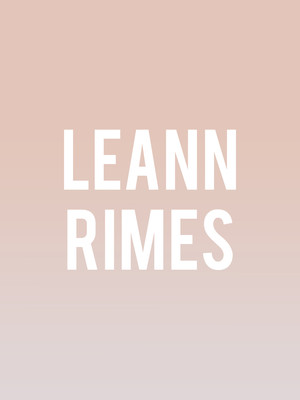 A seasoned performer who knows how to pull out all the stops!

LeAnn Rimes released her first hit, Blue, when she was just 13-years old, and has had a rocky path since with many awards and further Billboard-topping moments mixed in with some of the challenges of living the public eye. Perhaps best known for her Country crossover success with hits like How Do I and Can't Fight The Moonlight, the songstress is hitting the road and bringing along her hit-filled catalogue, coming to in , ,

With a sweet, dulcet-toned voice taking centre stage, Rimes is also adept at conversing with her crowds in between songs, making each concert a personal affair. Having sold over 37 million albums internationally, the seasoned performer is still a forced to be reckoned with and her energy on stage is enough to have Country's young stars quaking in their boots.

Sound good to you? Share this page on social media and let your friends know about LeAnn Rimes at Chandler Center for the Arts.