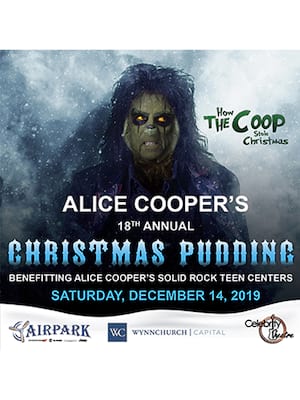 He is part-ham, part-showman, the Phantom of the Opera reincarnated as a rock god.

It just wouldn't be Christmas in Phoenix without Alice Cooper's Christmas Pudding concert. The hell raising show not only blasts away the winter blues but raises much needed finds for the classic rock icon's Solid Rock Teen Centers, where youngsters aged 12-20 can attend free arts and vocational programs. The annual bash returns to the Celebrity Theatre for its 18th year running, bringing with it a whirlwind billing of alternative acts old and new including Joe Bonamassa, Rob Halford, Nita Strauss, Mark Slaughter, funnyman Jim Breur and of course, the twisted ring leader himself.

For over fifty years Vincent Damon Furnier has unleashed madness and mayhem under the moniker Alice Cooper. A pioneer of the shock rock genre, he's injected his love of all things goulish into flaming hard rock and heavy metal with a gravel-toned voice, songs that could form the soundtrack of many a slasher flick and a penchant for on-stage theatrics - think gallons of fake blood, guillotines, electric chairs and snakes. This Christmas Pudding revival also features the very special reunion of Dennis Dunaway, Michael Bruce and Neal Smith - members of the original Alice Cooper Band.

Sound good to you? Share this page on social media and let your friends know about Alice Cooper's Christmas Pudding at Celebrity Theatre.