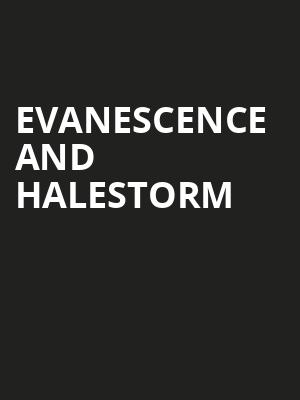 I can't think of a better way to break the silence than with our dear friends in Evanescence.

Why See Evanescence and Halestorm?

Alt-metal icons Evanescence and Halestorm are teaming up for a powerhouse joint tour this winter, bringing a smorgasbord of heavy goth and emo rock, and course, phenomenal vocals to a stage near you. As titans of the genre, this is an unmissable chance to see both bands in what is sure to be one unforgettable night out!

Bringing together the epic, symphonic tendencies of groups like Nightwish and the hard-hitting riffage of contemporaries such as Linkin Park, the band are undoubtedly one of the genre's most important recent figures. We're sure they'll be playing plenty of their old cuts, alongside new tunes from new record The Bitter Truth.

Possessed of one of the most powerful voices in modern rock and roll, frontwoman Lzzy Hale shreds as powerfully as she sings. A veteran performer, Hale is charismatic and commanding, unleashing sonic thunder and demonstrating her jaw-dropping vocal range on standout tracks 'Black Vultures', 'The Silence' and 'Love Bites (So Do I)', the latter of which won them their first Grammy. Combining shades of heavy metal, industrial rock and pop, Halestorm make no apologies for their singable, earth-shaking anthems which empower the listener and elicit mass mosh-pit euphoria in equal measure.

Seen Evanescence and Halestorm? Loved it? Hated it?

Sound good to you? Share this page on social media and let your friends know about Evanescence and Halestorm at Arizona Federal Theatre.